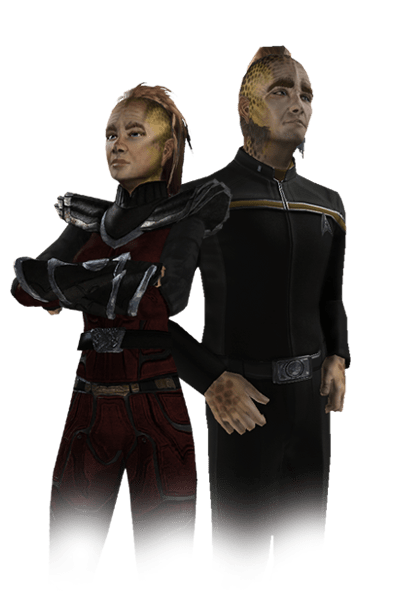 Star Trek Online site has been updated with the news that the Talaxian species will now be available the game’s lifetime clients. Players of both Federation and Klingon factions are able to create Talaxians that also contain a unique species trait. Perfect World is enticing players to buy a lifetime subscription by dropping the purchase price $100 to $199. 99.

Natives of the planet Talax in the Delta Quadrant, Talaxians are a jovial, friendly humanoid species who enjoy food and family and have a strong spiritual outlook on life. Talaxians have pale skin with areas of yellow to reddish spots on their heads, arms and bodies, and a plume of hair on the top of their heads. They are stocky and have dense musculature on their upper bodies and twin spinal columns. Most males have whiskers that develop in puberty.

In the mid-24th century, the Talaxians fought a violent and punishing war with the Haakonian Order, which ended after the Haakonians unleashed a metreon cascade on one of Talax’s moons, killing more than 300,000 colonists and forcing the Talaxian government to surrender control of their world. As a result of the war, many Talaxians have left Talax. Some are wanderers and traders who range throughout the Delta Quadrant, but other Talaxians have gathered together in an attempt to settle a new world and found a new society.