Patch 6.0.2, the pre-expansion patch, is a few weeks away from live realm launch and is already available for testing on the private test realm or PTR for those of that had not played the beta.

One of the major changes we liked was that blizzard adopted the bag styles of some much loved bag ui mods, lets go a little more in depth.

The noticeable improvements to inventory overseeing could very easily be one of the big quality of life improvements headed our way once this patch lands. Each of your game bags can be given among the following designations: equipment, skills and consumables.

If you click the new Tidy up button all items will be sorted in your various bags based on these designations much like the current game modification Genie. Items will also get colored borders matching their rarity for being easily identified and vendor trash items should have a coin symbol indicating that they’ll be sold with simply no worry. In addition, tradeskill items can currently stack beyond 20 up to new welcomed maximum stacked items with 200. 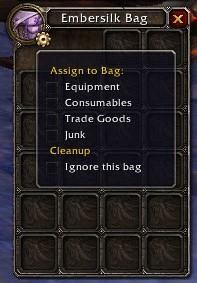 These are trade skills, players can now unlock a new tab into their banks for keeping reagents. This new storage for recyclables will clear upward your bag room and keep it that way as crafting items won’t require reagents to be carried by the smoothness – they’ll be pulled directly in the bank and reagent standard bank if needed.

END_OF_DOCUMENT_TOKEN_TO_BE_REPLACED

The World of warcraft community site have been updated with a couple of articles about forthcoming changes towards game. The first lays out the current patch notes (v5. 2) about the Public Test Region. The second is a blog article about changes coming over to PvP gear sometime soon.

Here are the highlights of the patch changes

To accomplish the goals of making PvP more accessible and less punishing, gearing more consistent and flexible, and flattening the power curve out over the course of a season, there are some significant changes in the works

Blizzard has announced the new public test realm 5.2 is now online and free for the world to start testing, arena seasons ending, panderia content reaching maturity and class changes that will blow you away.

Patch 5.2 The Thunder King is now available for testing on the Public Test Realms! By logging in you can help us test a massive new raid dungeon, a multi-faceted new quest hub, Pet Battle improvements, new world bosses, significant class balance changes, brand new pets and mounts, assorted bug fixes, and more. If you’d like to help test and provide feedback, you can start by copying your character and downloading the PTR client. Once you’ve had a chance to try things out, be sure to visit our PTR Discussion forum to discuss the patch, and the PTR Bug Report forum to report any issues or errors.